The Northwood Municipal Airport, Vince Field, is located one-half mile southwest of Northwood. In 1976, the city of Northwood and the townships of Avon, Grace, Lind, Logan Center, Loretta, Washington, Northwood, Pleasant View, Fairfield and Union formed the Northwood Municipal Airport Authority. It is a General Aviation 1 airport with a 3,160’ runway that was completely renovated in 1997. An overlay on the runway was complete in 2001 and a lighting project was completed in 2003. In 2004, the airport installed a PAPI system and a Beacon with tower. A municipal T-Hangar and taxiway was complete in 2006 and new snow removal equipment was purchased in 2007. The airport authority built an additional municipal hangar completed 2009.

Several aircraft may be in the pattern: from ultralights, to agricultural aircraft, to UND students and other flight training operations not all with radios.

Attendance: Monday - Saturday 8am to 5pm 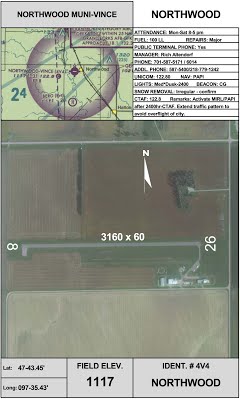